August 5, 2018
August 3rd was my first day living in Sucusari. Ellie (AKA Liz, who just told me she prefers Ellie) and I moved all of the expedition gear, food, and our personal belongings to the community the evening of the 2nd. Shout out to Explorama for giving us a lift with the huge amount of stuff that we had to bring. 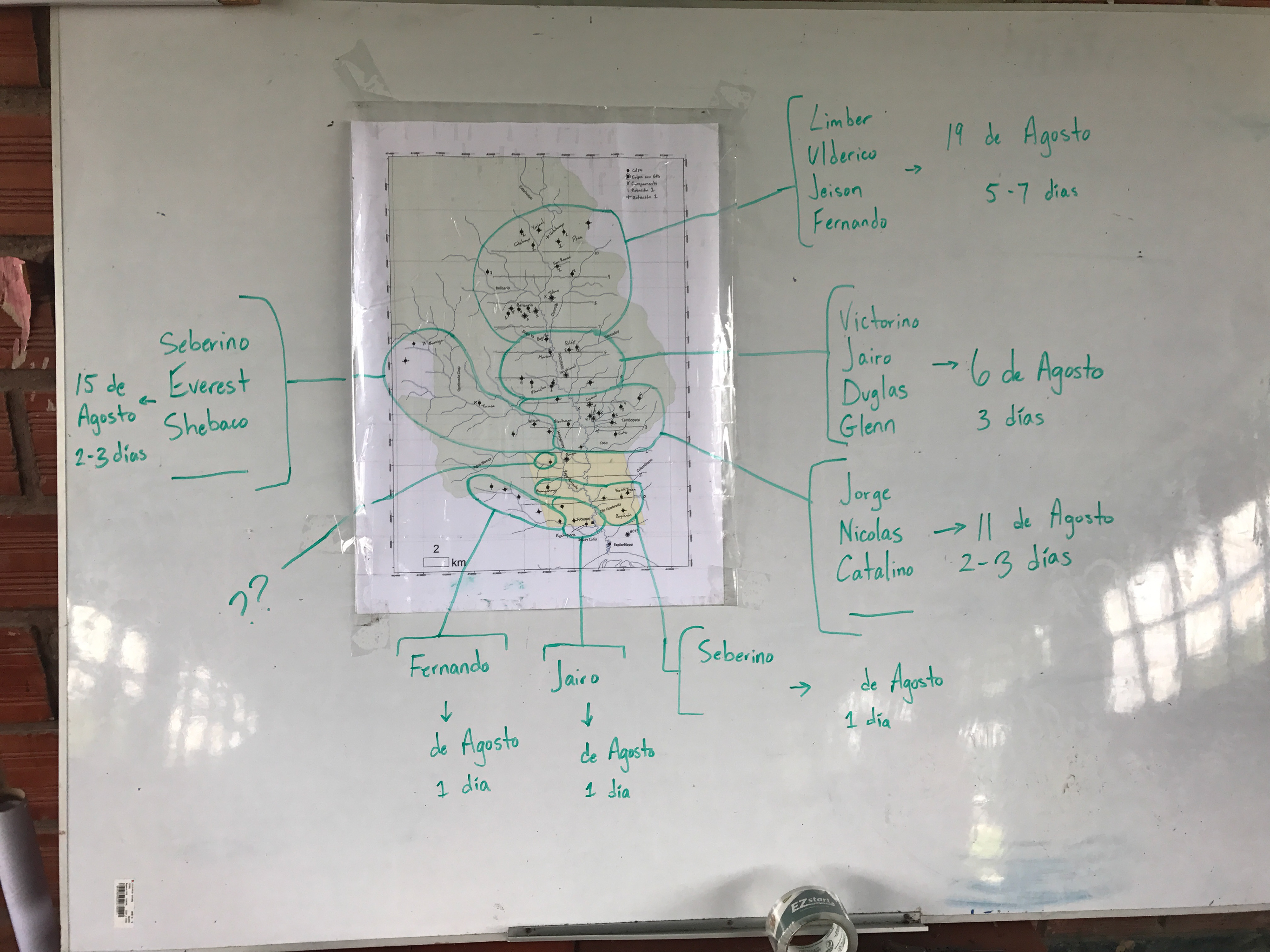 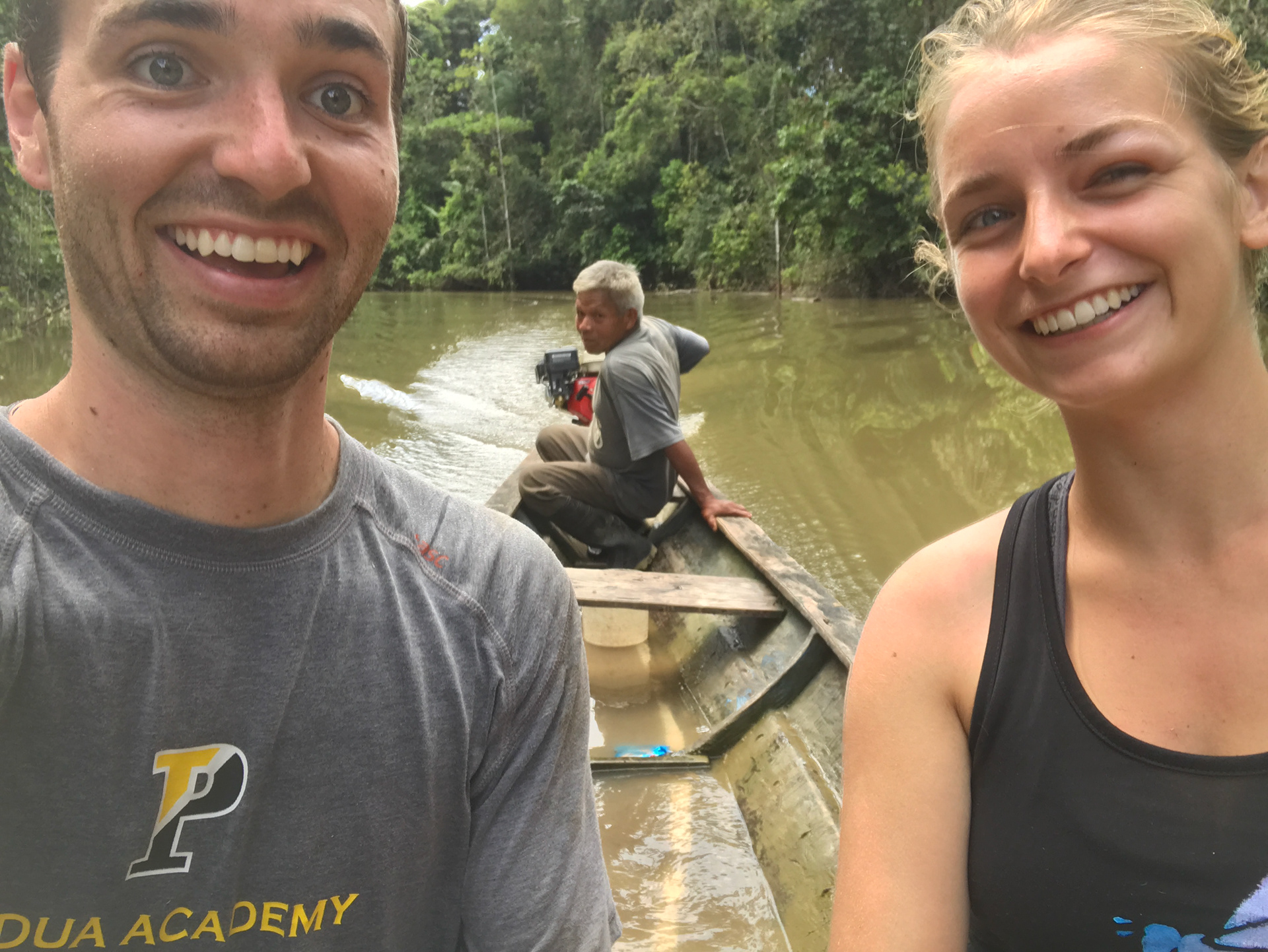 The bat group arrived at 4pm for a meeting with the community to make sure that they had permission to work there, and to set up nets to trap the multitudes of bats flying around. It was all very nice and formal, and the Maijuna said yes, that the work is well and good. We walked around with the team and showed them the places that we had seen bats in the community, and explained how the bats were living in the thatch roofing on the outside of the bat house, but not actually inside of it where they are supposed to live.
The team set up a series of bat nets around the bat house itself and the maloca (communal meeting space), where some large fruit bats live. The nets were huge, around 20 feet high and forty or so long. They set up the nets at 4pm, and waited for the bats which usually come out around 5:30pm or 6pm. I hitched a ride back to the lodge to pick up some gasoline and say hello to Katie, and when I returned the team was sell under way catching bats. It was pretty cool to see, I have never seen those types of bats up close before. Kind of scary. They advised me not to handle the bats since I wasn’t sure when my last rabies shot was. I tried to argue, and lost. Classic. By 7pm, the team had caught way more bats than they could handle and they couldn’t process them fast enough.
The morning of the 5th, Ellie and I split up to find some more mineral licks. Ellie went east with Victorino to a site known as Boqueron and another lick nearby, and I went walking with Jairo to the west. Jairo said that it would be a nice easy walk and we’d be back before lunch time no problem. Little did I know that the Maijuna pretty much say everything is “muy cerca” (very close). I think I have about figured out the “cerca” scale. Anything within an hour and a half hike is “muy cerca”. Anything from an hour and a half to two and a half hours is “cerca”, and anything more than a two and a half hour hike away is “lejos” (far). When I think of hiking through primary rainforest, “muy cerca” means maybe 15 minutes, because the hiking is not the same as what you’d think. Most of the time you’re either doing high knees so you don’t trip over vines, branches, and plants or you’re walking through palm swamps with mud and much up to the middle of your calf. The easy times come when you’re crossing rivers and streams over rotten, fallen trees – there’s no mud there. I think you get my point. To me, a one hour hike should probably qualify as “lejos”, but I’ll leave that point there. The first mineral lick Jairo took me to was a brisk 55 minute walk from the river, through chacras (fields), palm swamps, and across rivers and streams. It took us a few minutes to clear the mineral lick of debris and plants and place a camera trap. The second mineral lick really was “cerca” in that it was only 20 minutes walk from the first lick, although man were we booking it through the forest. Jairo can cross tree-bridges like nobody else I have ever seen, he screams confidence. When we finished with the second lick we headed back towards the community (hour and 45 minute hike), while taking a detour to one of Jairo’s chacras to harvest some plantains for the upcoming expedition. I saw Jairo break a sweat for the first time here – while he hiked the last 30 minutes through palm swamps with 60 pounds of plantains strapped around his head. It was only a few drops of sweat, but it counted. I was soaked and tired and smelly and arrived to find that Ellie had gotten back hours before, was perfectly dry and happy and playing with Nancy’s pet baby Saki Monkey Raul. Then she informed me that Luis, who was with Nancy, knew of three mineral licks that I had not mapped. Just what I wanted to hear…
With the bat squad, today was more of the same. The bat team came back with nets around the school, where they had seen bats roosting. This time, the nets were up by 6pm (rain delay), but by 6:30pm there were so many bats in the nets they couldn’t take them out fast enough; and they couldn’t take down the nets without taking out the bats first. The result was more and more and more bats being caught. 41 in total got caught before the team could finally get the nets down – way more than they could hope to process in one evening. It was a pretty cool process to participate in and I love getting to do some new science of course. Elvis was busy at work setting up an expedition for tomorrow, to the Maronal region halfway up the Sucusari basin. It seems that we are set to go for tomorrow, just have to get the food and gear laid out and distributed.

No Birds to the Face

Reflection on Perception
↑Back to Top